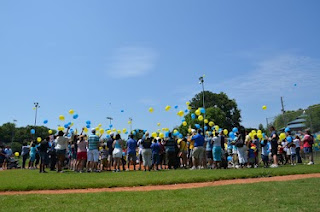 Close to 300 members of the Kate’s Club community joined together on Saturday for our first annual Memory Walk and Spring Picnic.

Children grieving the loss of a parent or sibling, other family members, volunteers, and corporate supporters showed up on a beautiful Saturday afternoon in Coan Park in Kirkwood. Together, they walked in memory of their loved ones.

As everyone arrived and before the walk, all of the participants designed a placard in honor of their family member.

“It’s really uplifting to share my story with people that understand and hear their stories in return. It helps the healing process.” said Chris, a 14-year-old boy whose father died three years ago.

The camaraderie and energy was evident as families shared their stories and experiences. It was so compelling that an 8-year-old boy and his father decided to join the walk on the spot. The two of them were on the baseball field practicing when they inquisitively asked what everyone was doing. After it was explained, the 8-year-old asked if he could join and walk in memory of his grandfather. He and his father then joined the festivities and the walk. This is an example of how pervasive the issue of grief is within our society.

The walk incorporated several activities including creating a sidewalk chalk mural, and finding someone you have never met and sharing your story with them as you walk together. At the end of the walk, there was a memorial balloon release. The event concluded with a fun filled cook out.

The Quest Foundation had generously agreed to match all donations up to $21,000. After a final push on the morning of the event, the goal was reached, for a total of $42,000 raised for Camp Good Mourning.

Saturday proved to be an incredibly successful and fun event on many different levels.