Skip to content
In early 2006, Callie’s dad had been having some balance issues which led to a fall that landed him in the hospital. While there they ran a CatScan and discovered that he had advanced stage melanoma. He immediately began treatment. Initially the doctors gave him three months, and he ended up living for eighteen more. Callie valued that extra time, and values all of the memories she has of him now. I hope you are inspired by the ways that Callie celebrates his life every day.
1.     What is a favorite memory you have with your dad?
There are so many, but I will never forget the anticipation of waiting for my Dad to come home on a Thursday night.  He worked in Chicago (and we lived in Atlanta) Monday – Thursday until I was 13, and we had a little family ritual beginning on Thursday afternoons.  We (me and my two brothers) would wait for my Dad’s car to drive up the driveway, sometimes camping out in our little person rocking chairs by the window…he would come through the front door and we would all tackle him.  He would always have an Archie comic book for each of us (and sometimes Babysitter’s Club for me)…the crazy thing was, he always knew which ones we didn’t have and presented a new one for us all.  I still don’t know how he did it!  Then Friday mornings he would drive us to school (a break from riding the big yellow school bus), always in his bathrobe…and 10 out of 10 times, we would get stuck at the red light he had deemed “the longest light in history,” causing us to think we would be tardy for the bell.  Then on Friday night, we would go out to dinner at some local kid-friendly establishment via “the dip road” – Lake Forrest Drive…no matter how far out of the way it was. 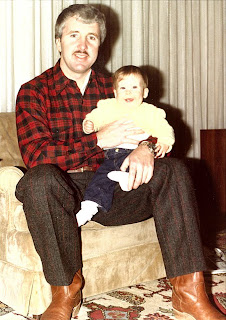 2.     What was helpful to you in dealing with your grief after your dad passed away?
I think what was most helpful to me was the support of my friends.  It was amazing.  His funeral service was on a Sunday afternoon and I swear half the church was made up of my friends, most of which had never even met my dad.  I will never, ever forget who was at the church that day…it truly isn’t as much what people say, it’s their presence that really matters.  The fact that they took the time to show up for you.  That day and the weeks that followed with cards, food, flowers and other pick-me-ups really helped me my spirits and just knowing that people cared.
3.     What wasn’t helpful?
Getting the [insert concerned face] “How ARE you?” from people that I saw when he was sick or right after he passed away.  Because how do you really sum it up?  Every time I would hear that I would just want to cry because if you really want to know, I’m doing terrible, I’m sad all the time and cry obscene amounts at the smallest things but I’m taking it one day at a time.  And that’s not really appropriate for cocktail conversation! 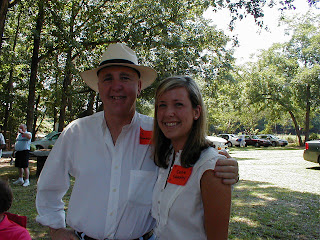 4.     Is there something that when you see or hear it reminds you of him?
Little things, all the time.  And I still think for an instant that I can pick up the phone and call him to tell him about something and then I remember.   He loved the Georgia Bulldogs, so whenever they have a big win I think about how I wish he was here to see that (rare these days J).  When I was 2, Magnum P.I. was at its height and because Tom Selleck had a mustache just like my Dad, I thought they were the same person….so Tom Selleck reminds me of him.  I think of my Dad whenever something breaks in our house and my handy husband fixes it…growing up, I never understood why other people called these electricians, plumbers, handy-men…can’t your Dad just fix it??  Mine could.  He would give us Christmas money all in $2 bills, so whenever I hear a reference to a $2 bill I think of him.  Tons of little, tiny things make him run across my mind, and I’m so glad – one day I want to tell my son, Rush, these tidbits about his grandfather he never met.
5.     What do you do to honor his memory?
Every Father’s Day we eat at the Varsity for lunch.  We would ask my Dad where he wanted to eat for Father’s Day, pick anywhere, anywhere at all…and he would always reply with – “The Varsity.”  On his birthday, we go to an Italian restaurant that he always wanted to go to – because they would give a free meal to a person on their birthday. He was a creature of habit and never wanted anything elaborate – at the heart of everything, he was just a simple country guy from Apalachee, Georgia.
6.     What do you think he would be most proud of now?
I think he would be proud of me for starting my own business…he was always an entrepreneur and loved working for himself.  I think he would love that I have a family of my own and that I married a guy just as handy as he was to take care of me!
7.     What advice do you have for someone dealing with the loss of a loved one?
I would let them know that it gets less hard (not necessarily easier…just less hard) every day.  I remember right after my dad died, on the 12th of the next month, I would think “wow, Dad’s been gone for a whole month.”  And then 3 months, and then 6 months…and then a year or two, and you don’t think of time in those terms anymore.  But it takes awhile.  Also, the 1st calendar year is very hard…1st Christmas without Dad, 1st Father’s Day without Dad, etc., leading up to the 1st anniversary of their death.  And that’s always going to be a hard day I think.  But the good news is that the days in between get so much better.