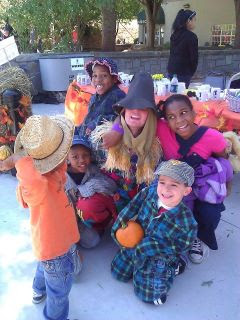 The “money” swirled around Sam Halpern so fast that he could only come up with a handful of cash.

But getting rich in the cash grab booth wasn’t why the 11-year-old had his mom, Betsy, bring him out to Mason Mill Park in Decatur for Kate’s Club Fall Festival.

“Just being able to come here and you know that you don’t feel weird and you don’t have to explain because everyone has had a loss,” said Sam, who has been involved with Kate’s Club since he was seven years old.

Dozens of Kate’s Club families embraced the opportunity to spend a beautiful day outside playing games, participating in arts and crafts and enjoying the friends they’ve made at Kate’s Club.

The favorite game of the parents was Kate’s Club Family Bingo, a game designed as an icebreaker to enable parents to make new friends as well.

At one point more than 10 parents were crowded around a green picnic table trading Bingo squares.

“Who has been to the Grand Canyon?” one parent called out.

“Who has met Kate?” another asked.

“It’s huge,” she said. “They talk to each other, which is great because how the parents are doing directly affects how the kids are doing.”

On Saturday, as they jumped in the bouncy house, played on the playground or guessed the number of M&Ms in a jar, the children of Kate’s Club were able to take an afternoon to smile, laugh and play with their friends.

“Kate’s Club is really a blessing in disguise,” said Kish Charles, a Kate’s Club mom. “I just love the fact that the kids have someone to relate to.”

Emily Hawkins, Kate’s Club executive director, was thrilled at how great the day was.

And for the first time – thanks to a member of the Kate’s Club family – the event was put on and sponsored by a professional event marketing company, Ignition.

Morgan Osbaldeston interned at Kate’s Club in 2009, and now works at Ignition.

She helped create the partnership, and was a big part in running the festival and created the first thing guests did when they arrived.

Each person pressed their thumb into red or orange ink and then placed their colored thumb on the Kate’s Club Family Tree, leaving their own “leaf” behind and signing their name beside their leaf.

This way, Osbaldson explained, Kate’s Club can posted the Family Tree and always remember who came out for the 2011 Fall Festival.

“We thought it was a great tie in with Fall,” she said.