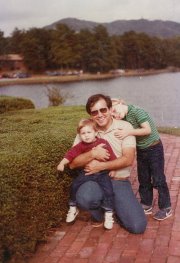 Last year in this very space, I wrote about my dad.

The story I told last year was about the things I learned from his death.

Volumes of information on mental illness, specifically anxiety and depression.

His disease. My disease.

This year, I want to share more about my dad from when he was alive.

So, I’ve been thinking about the things I learned from him while he was alive, and I boiled them down to three things that he taught me that still have a consistent presence in my life.

So, in reverse order of importance:

I had to write a “how to” report at some point in my life and I did it on changing a flat tire, so I enlisted my dad’s help in this venture.

I can still remember standing in the driveway as he showed me how to lift up our 1987 Honda Accord with a jack, unscrew the lug nuts, toss the busted-up tire aside and slide on the spare before screwing the lugnuts back on securely.

Sounds easy, right? If you were taught correctly, it can be. Fortunately (Unfortunately?), I’ve gotten really good at it because I’m pretty much a master of creating flat tires. So, it helps that I can rip one off and get it changed within five minutes or so.

Every time I do, I remember him teaching me that day, and I can hear him scolding me for busting another one. Or maybe the voice I’m hearing is now my wife, Kacy.

No. 2: Driving a stick shift

This is at No. 2 because my No. 1 item is more sentimental, but the truth of the matter is there’s nothing I learned from my dad that I use more than this skill.

Don’t get me wrong, I have no prejudice toward automatic transmissions. I see their value. I won’t refuse to drive one. Kacy’s Nissan Xterra is an automatic.

But I LOVE driving a stick shift. Every car I’ve driven as my own has been a stick, and that will never change. It’s really something about me that’s ingrained in my personality.

But it wasn’t always that way.

When my dad began his attempts to teach me to drive a stick, it didn’t go well.

Lots of long Sunday afternoons. Lots of frustration on my part. More on his.

I did not want to learn how to drive a stick. I was a silly teenager who was more interested in being stubborn than gaining a really valuable – and fun – skill.

But, finally, it stuck. One day we were at church and my friend Jamie Pruitt was driving a new Jeep – with a stick – and I decided right there I needed to do it and that afternoon in an empty parking lot, I nailed it.

As I inherited his mental illness, I also inherited my dad’s competitiveness.

For many years, I’ve had my butt kicked on the pool table by good friends.

Up and down the table. Butt kicked.

But no one kicked my butt like the man who taught me how to play.

Steve Romig didn’t let you win. Whether you were a friend on the tennis court or his oldest son at the pool table. You had to earn it.

Sometimes I did. Mostly I didn’t.

My favorite memory of shooting pool with my dad was on Jan. 17, 1991. We were at Opening Break on Assembly Street in my hometown of Columbia, SC. The plan was to eat dinner while shooting pool and then go see our South Carolina Gamecocks take on Virginia Tech in basketball.

While we were shooting pool and eating, the room became silent as the news came across the televisions that Operation Desert Storm had begun. It was a somber moment for an almost 13-year-old, who had no concept of war.

When my dad died, he left separate letters for me, my mom and my brother.

One of the last things he said was that he wished he had been able to get us a pool table for our house. His dream was realized 21 years later.

This Jan. 20, I had a pool table installed in my home, and the next day my brother, Bryan, came to Atlanta from Greenville to shoot the first game on it with me.

If you can, I be honored if you’d support Kate’s Club in memory of my dad with a contribution of $16 (for the 16th anniversary), $47 (for his age when he died) or anything you can afford. I’ve set up a personal fundraising page in honor of dad that you can visit here: http://www.firstgiving.com/fundraiser/jeffromig/jeffromigsfundraisingpage.