Skip to content
It’s one of the easiest yet one of the most difficult things we do.
Imagine you’re an airplane pilot coming in on landing in the midst of a heavy cloud cover. 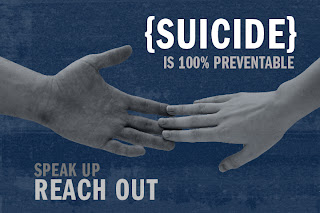 Your instincts tell you you’re coming in the correct way, but when you break through the cloud, you’re actually upside down.
In the midst of that cloud, you lost your bearings and had those clouds be low hanging, something disastrous could have happened.
This is similar to the human mind impacted by depression. Thoughts can build up in the mind that seem logical – such as how ending your life can be rationalized – but in actuality, that mind has lost its bearings.
This is why we MUST talk.
Talking removes these thoughts from the mind and puts them out in the open. That openness can provide the perspective needed to avoid suicide.
My dad committed suicide on Feb. 24, 1996 when I was 18.
The letter he left made a rational argument for why our family was better off without him. He was wrong.
But he never talked, and he had unequivocally lost his bearings.
If he had talked, things might have been different.
Several weeks ago was National Suicide Prevention week, but every week is a week to be cognizant of loved ones who could be contemplating suicide.
I implore you to talk to the people you love and to ask the people you love to talk to you.
By talking, we can save lives.
For more resources, please visit the American Foundation for Suicide Prevention at http://www.afsp.org/ or the Suicide Prevention Action Network (Georgia) at http://www.span-ga.org/span/.
Would you like to share your story? Please contact us at [email protected]
Posted in Official Blog Post, suicide prevention, talking about depression