Chris is an 11 year old Kate’s Club member.  His mom died in February of 2010, and he joined KC in June of 2010.  Chris went to the Georgia Aquarium with our Kate’s Club Outing on Saturday.

Chris clearly knows his marine biology and ocean ecology.  He knows about beluga whales and whale sharks and grouper.  He watches NatGeo and Animal Planet, and he has learned a lot.  Although the aquarium has a very high ambient volume, Chris shared his knowledge with us as we explored the exhibits.
Chris also loves soda.  He brought money to buy a soda at the snack bar.  Kate’s Club has a well-enforced rule that we do not allow the kids to go to the snack bar or the gift shop on outings.  We take up to 70 kids to each event, and there are many reasons why our ‘please do not bring money on a KC Outing’ rule is maintained.  Here is a partial list of those reasons:  not everyone has money to bring, the lines are long, and there are always other wonderful ways to spend our time at each event, we provide everything the kids need while we’re out and about (snacks and water, occasionally even a souvenir if they’ve been donated).
Sometimes this is a difficult rule to accept if you’re a kid who has money in his pocket for the very reason of buying a sweet fizzy refreshing drink.  Chris struggled a bit to accept this rule on Saturday.  He asked in various ways in case there was a potential loophole in the rule or the logic behind the rule.  He expressed his disappointment freely.  He did not want his money to go unspent.
As he worked toward acceptance of the rule, and after spending time at the Sea Otter exhibit, Chris’ heart was inspired to philanthropy!  He decided he wanted to donate his money to the GA Aquarium.  We were so pleased by the sincere spirit of giving with which he made this decision that we set out to help him discover the process of how to make a donation to the aquarium.
We went to the Visitor Information booth where Chris was received with accolades and appreciation.  The aquarium gave him two thank you gifts…a key chain and a reusable grocery bag.  He kept the key chain, but donated the bag to Kate’s Club for use during our outings.
Here is a photo of Chris just after his act of kindness: 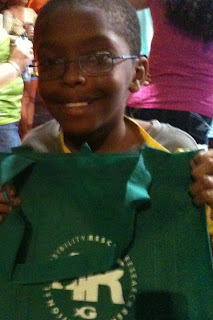